AT Prepping: A Women’s Perspective

AT Prepping: A Women’s Perspective

Life has looked a lot different for me the past few weeks. I often catch myself feeling overwhelmed by the constant influx of unstructured time I encounter, but as I have begun to settle into not knowing with confidence, I have also embraced opportunities in the near future with confidence.

What that means is a little complex, but it mostly pertains to

a crazy and spontaneous decision –

of thru-hiking the Appalachian Trail.

I have been working tirelessly the past few weeks on preparing ways to raise money for our trip. It has been mentally and creatively exhausting, sometimes even emotionally exhausting, as many of my efforts seem rejected.

But even as exhausting as finances can be, preparing my mind has proven to be the most difficult thus far.

As I have tried to sort through ways I am having to prepare, I decided it would be good for me to start writing it out. Specifically because I think it could be beneficial for people to read through – whether it’s because they’re preparing as well or if it is to keep up with where I’m at.

Either way, I thought I would start out by answering some common questions

that I, specifically, get asked.

“How did Logan convince you to do the AT?”

This is my all-time favorite question to answer because it was actually my idea. I have dreamt of a thru-hike for quite some time and when Logan and I started dating, I just knew that he would be the perfect companion for it. When we found out that I would graduate in December and he wouldn’t be starting grad school until the following August, it just seemed like the perfect timing! So one day while we were in the car driving to Georgia, I said “hey, we should hike the Appalachian Trail.”

I wish I had a picture of his face when I said that because it was potentially the sweetest, most genuine display of excitement and joy I have ever witnessed!

Anyways, since those words escaped my mouth it has never been a question – simply a plan.

“What about personal hygiene as a woman? Like, shaving?”

I also reeeeeeally love this question.

If you know me and know me well, you know this isn’t necessarily a big issue for me. In fact, one of the most uniting things for Log and I is our, well, lets just say: “unique habits of personal hygiene”.

I get a lot of interesting replies and/or expressions when I express excitement about not showering consistently for six months or for not taking a razor on our journey, but I really mean it! I’ve always been one to prolong time between showers because “save water, right?” 😉

But I’ve also never been too keen on the whole ‘women have to shave’ thing either. Not because I’m a feminist or want to be ‘different’, it just has never really made a lot of sense to me. Why do women get gross looks when they have long leg hair? Or why is it seen as taboo when they have underarm hair? Like is it really necessary?

I will go ahead and be honest with you – I have not shaved in about 2 to 3 months. And If you think that women don’t actually get gross looks or questioned when they are not shaving up to society’s standards – I promise that we do. I have stopped shaving to get my mind used to the concept and used to seeing leg/underarm hair, but I have also stopped to be my most natural self.

I have to tell you – its incredibly empowering.

I feel like this question is typically asked after the hygiene question because people often associate these types of things with ‘feeling like a woman’.

Like I have a really deep-rooted dislike of it all.

It has only been a month, but it has been a journey for sure!

There’s been a lot of days where I look in the mirror and have the strongest urge to put some on, but I have somehow managed to avoid it completely.

I could probably write an entire post of empowering women to stop wearing make-up because it really is something I believe should stop, but I’ll save that for another day 😉

Moral of the story: I will not be wearing make-up on the trail.

I probably will not be wearing make-up until we leave to keep letting my mind adjust to seeing my face without it.

And most likely, I will not be wearing much of it after we finish the trail.

But, thank you for asking!

“Do you have to be in any certain shape to do it?”

Most times I want to reply with something like, “DUH YOU HAVE TO BE IN GOOD SHAPE TO WALK TWO THOUSAND MILES WITH 30-50 POUNDS ON YOUR BACK!”

I think I usually get really defensive because I feel like people are attacking my current weight. But, I mean, surely we all know that you have to be in pretty good shape to hike 2,000+ miles.

So the answer to this question is yes. You definitely should prepare your body to be in conditions as they will be on the AT as much as you can. Log and I hike as much as our hectic schedules will let us. We also throw our packs on every morning before work and walk around the hills of our neighborhood for anywhere from 2-6 miles. We do push-ups, core-strengthening exercises, and are planning to start yoga pretty soon.

However, our minds have fought our physical preparation pretty hard.

I know that doesn’t really make sense, but when you know that you are about to wake up at the butt-crack-of-dawn to walk 8-16 miles for 6 months, your mind tells you to “keep on sleeping” or to “watch that movie”, etc.

But I promise, whether I’m a size 0 or size 10 – I am preparing my body as best as I can while working 40+ hours a week, being a last-semester student, taking care of my home and my family, and trying to make stuff to sell.

“What are you going to eat? Have you already started eating that way?”

This is a controversial subject, to my experience.

And really, it is kind of similar to the question above.

We try to eat really ‘clean’ through the week, but our minds really fight this the most. We have absolutely fallen in love with the food-scene in Birmingham, so it is really hard to know we will not be able to eat at our favorite places pretty soon.

With that being said, I think we do a good job. We try to only eat out once or twice a week. And when we cook, we try to cook health, fresh meals.

BUT obviously we won’t be cooking the way we are now while we are on the trail. And we obviously won’t be eating the portions that we are now.

We have already transitioned our bodies into eating oatmeal or something of that nature for breakfast, but the rest of the day is unorganized still.

There are two sides on this matter:

1 – Do you stop eating very much and lose as much weight as you can?

2- Do you fatten yourself up so your body doesn’t go into too much shock?

We’ve decided on the middle of the two.

We are not trying to gain weight, though hormone imbalances choose that one of us is ;-), but we are also not trying to lose a ton either.

We are simply focusing on enjoying the food we eat together and working out to get our muscles to where they need to be.

There are plenty more, but surely that is (more than) enough for now.

How To: Save the Planet

On February 3rd of last year, we announced to the world that we were going to be attempting a thru-hike of the Mountains to Sea...

When you register a thru-hike with the Appalachian Trail Conservancy (ATC), they send you a cool tag for you to attach to your pack. The...

1 – Don’t Eat Out… Ever This might sound simple or ridiculous to you, but I promise that it works! Before we left for our...
Your thoughts here 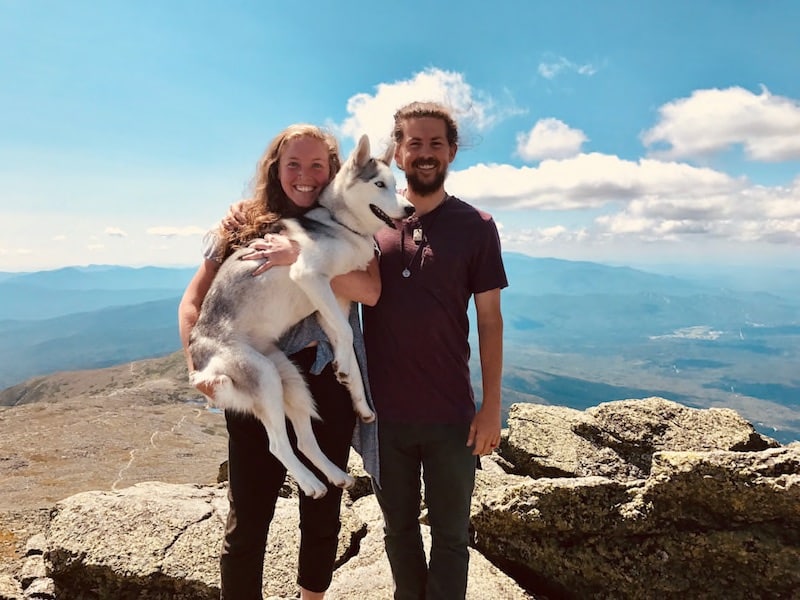 Thru-Hikers, Writers, Adventurers
We are Morgan and Logan Greenhaw. Or, as you might know us, MoonShine & Gibberish! We are thru-hikers and are here to tell you about our experience!

Have you heard about The Trailing Collective?

After we finished our Appalachian Trail thru-hike in 2017, we launched a business called The Trailing Collective. You can find out more about our business by clicking here!